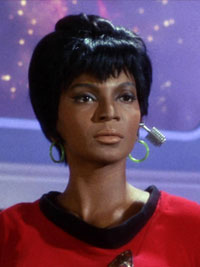 When The Captain needs to contact Mission Control to talk to the Voice with an Internet Connection, he has a number of options. He could call him up on his Comm Link, or maybe even find a pay phone. But maybe this is a job for someone more specialized, or maybe The Captain needs someone to delegate this to while he deals with other things. He needs the Communications Officer.

The Communications Officer need not be an officer, and in fact, will often be a lower ranking member tasked with maintaining and operating the complex radio equipment. On a sci-fi show, they will often have a workstation on the bridge of the ship, while in a war movie, you can expect to see this guy running around two steps behind The Captain with a cumbersome backpack radio with a huge whip antenna. Whenever we see Mission Control, expect to see an entire squad of these guys at work. More mundane examples include a secretary in an office, who has the job of screening calls to their boss and sending out messages for them.

Against Dangerously Genre Savvy enemies, he can expect to draw fire, especially if he has one of the bigger backpack radios. You can't call for help if nobody alive can use the communications equipment. If The Radio Dies First, they can be expected to be hard at work trying to fix it, or helplessly declaring that it can't be done.

Overlaps with Mission Control. Will often be working as one of the Bridge Bunnies. A key member of the Command Roster.

Examples of Communications Officer include:

I have one job on this lousy ship, it's stupid, but I'm gonna do it! Okay?