Everything About Fiction You Never Wanted to Know.
< Community‎ | Recap‎ | S1
Jump to navigation Jump to search 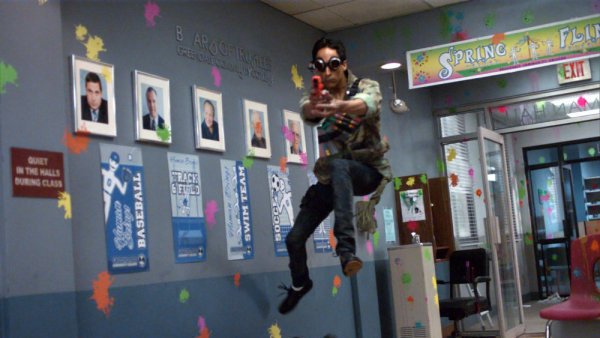 It's near the end of the semester, and as the other members of the study group discuss how infuriated they are getting at Britta and Jeff's Unresolved Sexual Tension, Dean Pelton walks in to inform everybody about the school's upcoming "Spring Fling", featuring music, food, activities, "what-what!" He also mentions that there will be a game of "Paintball Assassin", with a special prize for last man standing- what was to be a Blu-ray DVD player, until it was stolen, and is now "TBD".

As Troy ponders whether or not he wants this new "TBD" that Pierce is pretty sure he had for about a month in the seventies, Jeff announces that he will be going to his car for a short nap. When he wakes up, he stumbles out of his car to find the school all but destroyed with paintballs. Interrogating Garrett, who he finds lying slumped over in the hallway, Jeff discovers that shortly after the paintball game started, the students turned on each other once the Dean announced what the final prize for the winner would be. When Jeff asks what the prize was, he is told that the game has not concluded, and is "still happening! Right now!"

Before Jeff can extract any more information from Garrett, a Laser Sight appears, and Leonard plugs Garrett with paintballs several times before moving on to Jeff. Disregarding Jeff's insistence that he's not playing with the response that "Everyone's playing!", he pursues Jeff down the hallway, where Abed emerges, vaults over Jeff, and saves him by shooting Leonard with a few paintballs of his own. Abed takes Jeff from wandering in the Neutral Zone to the base of operations he has set up with Troy, where they finally reveal to Jeff the prize that has driven student against student: priority registration, the first pick for your schedule of classes next semester.

Garrett: "Over"?! This is not over! This is still happening! Right now!

Abed: Come with me if you don't want paint on your clothes.

Troy: They say the glee club has lured stragglers into sniper traps with cheery renditions of hit songs.
Jeff: Really? And people fall for that?

Jeff: I mean, I'm all for winning, but let's not resort to cheap ploys! [ takes off shirt]

Jeff: And tell the Drama Club their tears will be real today.

Dean: There will be a prize for last man standing, (sotto voice) or last man in a wheelchair without paint on him.

Dean: The prize was a Blu-ray DVD player... but it got stolen. So now it's TBD!
Troy: I want TBD! Is that new?

Jeff: You're not even a student!
Senor Chang: Wrong! [Holding up college schedule] "Critical Media Literacies" and "Politics of Gender", biyatch!

Abed: To be blunt, Jeff and Britta is no Ross and Rachel. Your sexual tension and lack of chemistry are putting us all on edge. Which is why, ironically - and hear this on every level - you're keeping us from being Friends.

Britta: Jeff and I do not have sexual tension. We just argue all the time.