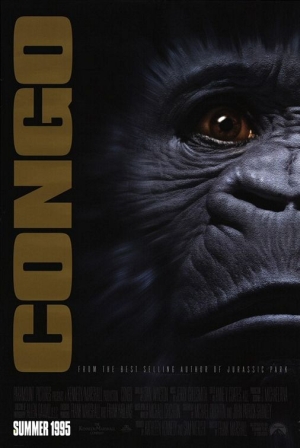 Congo is 1995 action/adventure film (with a slight comedic streak) based on the novel of the same name written by Michael Crichton (of Jurassic Park fame).

An expedition to the titular Congo on telecommunications company Travi-Com's part to develop a laser weapon ends in disaster when the party is slain by an unseen threat. Dr. Karen Ross (Laura Linney), who to used be the fiance of one of the members of the party, is sent to investigate the slaying and retrieve the weapon.

Meanwhile, Dr. Peter Elliott (Dylan Walsh), a primatologist, has invented a device that translates sign-language into audible English, and by doing so has given his pet gorilla, Amy, the ability to speak (she is voiced by Shayna Fox). Amy has been having nightmares, so Peter resolves to take her back to her birthplace in the Congo. At first he is unable to find funding, but then Romanian philanthropist Herkermer Homolka (Tim Curry) grants it. It is revealed that Herkermer has an ulterior motive; to find the mythical lost city of Zinj, said to contain an ample diamond mine. Peter, Amy, Herkermer, and Peter's friend Richard (Grant Heslov) meet with Karen and head for Africa. Once there, they meet their guide, Captain Munro Kelly (Ernie Hudson), and embark on the expedition.

Along the way, they encounter Zaire soldiers, hippopotami, and finally the city of Zinj itself, guarded by a pack of killer gorillas responsible for its elusiveness and for the initial expedition's slaughter.

Congo is certainly trite, shallow, silly and cheesy; but intentionally so. If you don't think too hard about it, then it's a perfectly acceptable So Bad It's Good or So Okay It's Average fragment of entertainment; if you're browsing Blockbuster one night for a DVD for movie night with your friends and they don't have Anaconda, this will do instead.

Tropes used in Congo include:
Retrieved from "https://allthetropes.org/w/index.php?title=Congo&oldid=1730596"
Categories: