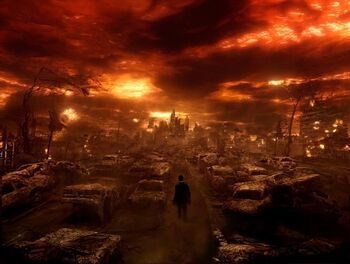 Constantine is a 2005 American film loosely based on Vertigo Comics' Hellblazer comic book, with some plot elements being taken from the "Dangerous Habits" story arc (issues #41-46) and others - such as the inclusion of Papa Midnite - from the "Original Sins" trade paperback. It was released on February 8, 2005 in Hong Kong, and on February 18, 2005 in the U.S. and Canada. It is rated R for violence and demonic images by the MPAA. It also contains mild language.

Things are getting strange stranger for John Constantine, American, atoner and Catholic demon-hunter. Demon activity is on the rise as more and more denizens of Hell are trying to cross over to earth. This would be right up Constantine's alley, but he's a little preoccupied with the fact that he's dying of lung cancer, and going to go to Hell despite all he's done.

Things come to a head when LAPD officer Angela Dodson approaches Constantine with news that her institutionalized, possibly psychic sister has recently offed herself. Constantine investigates and starts to uncover a connection to the demons and a possible plot to turn Earth into a literal Hell.

The film is widely disliked by readers of the comics, but has merits aplenty if taken as a stand-alone work.

While a sequel film has been in development hell for a while, an upcoming TV series -- which appears from promotional materials to be much more faithful to the source -- has beaten it to the punch.

Tropes used in Constantine include:
Retrieved from "https://allthetropes.org/w/index.php?title=Constantine&oldid=1562219"
Categories:
Cookies help us deliver our services. By using our services, you agree to our use of cookies.