Everything About Fiction You Never Wanted to Know.
< Cool Guns
Jump to navigation Jump to search

A submachine gun developed in the 1960s, firing .22 calibre ammunition at 1200 rpm from a top-mounted pan magazine of up to 275 round capacity. Much was made of its ability to chew through concrete blocks and body armour, though the latter was only possible if the person wearing it was standing still for an unlikely length of time. The primary purpose of the A-180 was as a riot control weapon for prison guards.

The Fabrique Nationale P90 is a submachine gun chambered for the 5.7x28mm round. The round was designed by FN and is currently used only by the P90 and the Five-seveN pistol, also made by FN. One of the P90's most innovative features is the 50-round magazine that lies flat along the top of the receiver, the rounds double-stacked sideways. The feed end of the magazine has a mechanism that rotates each round and drops it into the chamber pointing in the right direction, ejecting spent casings downwards through a chute behind the grip. Was once fairly rare in real life, yet many works, especially those set Twenty Minutes Into the Future, featured it, partly due to its futuristic appearance -- a case of Truth in Television as it were, since the gun was later adopted by many police and armed forces all over the world.

Video games love it, but particularly in older games the designers may have some rather odd ideas about how the P90 actually works; game P90s often eject in the wrong direction, and a fairly common mistake is showing the carrying handle as hinged at the front, popping up so the magazine can be inserted into it and then swung back down.

Heckler & Koch MP5 A3, with the retractable buttstock

Essentially a miniturised G3 (the mechanisms are identical), the MP5 was a popular weapon amongst police and counter-terrorism forces pretty much the world over from the '60s to the '90s and remains one of the most iconic weapons of its type; in particular, the MP5's media badassery was established when the British SAS used them to break the Iranian Embassy Siege in 1980. Like the USP, a large number of variants have been produced; of these, the most distinctive are the K ("Kurz," short) model, a shortened version designed to be easily stowed or concealed [1], and the SD ("Schalldämpfer," meaning "sound dampened") with an integral silencer. Has (along with other submachine guns) faded in visibility due to the rise of compact rifle-caliber carbines, though they remain popular among SWAT and counter-terrorism units, as for those purposes the less-penetrating pistol rounds have some distinct advantages. Movie MP5s may instead be played by modified 5.56mm HK33 or HK53 carbines, or by the civilian semi-auto variant, the HK94. 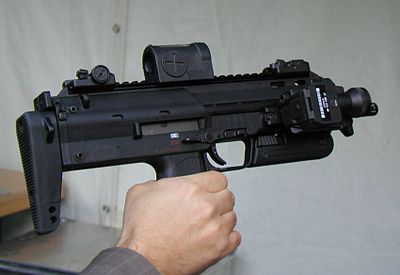 When we say "compact", we mean it.

A compact submachine gun marketed as a competitor to the P90, the MP7 is another weapon based on a scaled-down G36 action, this time firing a proprietary 4.6mm round designed to penetrate body armor at close range. Its small size makes it relatively easy to carry, and it can even be holstered (a rarity for submachine guns). The MP7 is in use with the German military and police, and several other countries have begun to replace police stocks of MP5 SMGs with the MP7. There is some criticism about the low terminal effectiveness and stopping power of the 4.6mm round, however.

With and without the stock

Basically a scaled down G36 assault rifle mechanism in a polymer shell, the UMP was intended as the successor to the MP5 submachine gun, but lack of demand for SMGs from traditional customers, along with a tendency to break, means it is not nearly as widely distributed as its predecessor. Civilian version known as the USC, features extended barrel and semi-auto only operation.

The TDI Vector (later renamed the "KRISS Vector") is a 2011 submachine gun developed by American company Transformational Defence Industries (later renamed "KRISS USA"), the Vector uses an off-axis recoil mechanism claimed to be revolutionary, though in actuality the design is a hundred years old. Starting to show up in video games due to its futuristic appearance and rather exaggerated marketing; much like the XM8, it's a tacticool gun. Often labelled incorrectly as the "Kriss Super V," a name used in early marketing.

The MP40, descended from the MP38, is the classic Nazi gun; a straight-blowback 9mm submachine gun used throughout WW 2. Much like the Luger, simply having one is often proof the character is a bad guy, no matter what the era, and it's often shown as the standard issue German weapon in video games; often on at least a one-to-one basis with the Kar 98, which was actually much more common.

You will see this in more or less anything with Nazis; as noted, in video games it's likely to be vastly more common than in real life.

The Eastern Tommy gun; the PPSh-41 is a blowback-operated weapon firing the 7.62x25mm Tokarev round, and was the most common submachine gun in the Red Army during WW 2. The weapon owes much to a 1934 design called the PPD by Vasiliy Degtyarev which was a near-direct copy of the German MP28; this was shelved owing to high-up Party members such as Molotov, Zhdanov and Malenkov sharing the common-at-the-time belief that submachine guns were not military weapons. With the outbreak of the Winter War, the Finns quickly showed the Red Army the worth of the SMG, and the decision was quickly reversed, a refined version of the PPD going back into production with a new 71-round drum magazine (directly inspired by the Finnish Suomi M31's drum magazine of the same capacity). Shpagin's gun was essentially a refined version of Degtyarev's still-too-complicated design, using the same magazines but redesigned for mass production. By using stamping and welding rather than time-consuming machining, the PPD's 13.7 man-hours per gun were cut down to just 7.3, and the result also proved extremely reliable, requiring minimal maintenance. Because the Soviets standardized all rifle and pistol ammo at 7.62mm caliber, Mosin-Nagant rifle barrels could be salvaged from bad or damaged weapons and cut in half to make two PPSh-41 barrels. It was also so easy to manufacture that production could be handed to factories with no experience in gun manufacturing whatsoever - if PPSh often look like they were made from a bed and window catch, this may be close to truth. The design was thought out in its deliberately crudeness: e.g. its recognizable sloped end of the barrel shroud with vents acted as a compensator, so the weapon was controllable even with excessive rate of fire and inexperienced shooter. The Red Army soon learned that new recruits could be turned into cheap killing machines by giving them More Dakka, so unlike the MP40, it was issued extensively, sometimes whole divisions being issued with only this weapon. It proved such an icon of the Soviet army that statues were built of soldiers holding them throughout Russia and Eastern Europe. From 1942 curved 35-round box magazines were produced, but, like the Thompson, it's more likely to be seen with its 71-round drum magazine fitted. This is a bit of Coconut Effect: 71-round drums inherited from PPD were considered Cool but Impractical as they were rather time-consuming to load by hand and prone to jam if not individually fitted (and more complex and expensive to make), while narrow boxes are simply more convenient to carry - though "drum in the gun, boxes in pockets" mix was used too. After the war it was retired from army and exported to the new allies, including China and Vietnam. On the downside, it's wasteful due to very high rate of fire (900 RPM), large (not a problem as such for heavy infantry, but tank crews and paratroopers need something smaller), heavy even with the small magazine, let alone drum (though if it wasn't, high rate of fire could be a greater problem) and known to drop fire (if far from the worst in this).

A British submachine gun which was developed from the Sten during and after World War 2. It is easily recognizable by its side mounted magazine similar to the Sten and its perforated hand guards (in some models). It saw very few changes in design while in service, eventually being replaced by the L85 assault rifle. It is still manufactured today in some countries, including India. After the 70s, its role in fiction is largely replaced by the MP5 and Uzi.

Descendant of PPSh-41 made even simpler and cheaper (for one, it's full-auto only), with problems of PPSh mostly fixed. Used the same cartridge, but incompatible magazine. It became even more popular.

The gun that made the Twenties roar. Although the Thompson was famously used in World War II as the M1 submachine gun, it is mainly remembered as the Thompson M1921, which could be used with the famous 50 to 100 round drum magazine. The use of this is a Hollywoodism based mostly on Rule of Cool; gangsters avoided the drum magazines because they made the weapon difficult to conceal, while militaries never used the drum magazines because the ammunition inside tended to rattle, it jammed easier, and made the weapon more cumbersome to carry and even heavier. The "Tommy Gun" has a rather exaggerated reputation as a gangster weapon, mostly due to a few high-profile users rather than actual common use; Al Capone, George "Machine Gun" Kelly and John Dillinger were the most famous. Movies would have you believe every gangster had one, and the Thompson is de rigeur for any Al Capone-esque, old school gangster Badassery. Goes great with fedoras and pinstripes, too. Wartime SMG design shifted to mass produced low-cost weapons like the M3 and Sten. The Thompson in comparison was hugely more expensive and was simplified during World War 2 (M1/M1A1) and retired more or less immediately after its end.

Just about all World War II movies, video games and TV shows use the Thompson. In games, it's usually more powerful than the MP40 but harder to get ammo for. 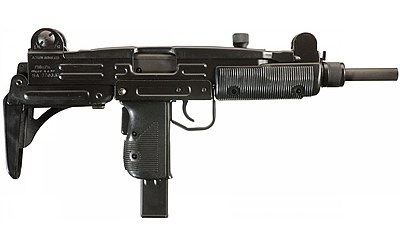 The full-sized version, as used by the Israeli armed forces

A family of 9mm submachine guns, the first Uzi was designed in the late 1940s by Uziel Gal and named after him, and first adopted by Israeli special forces in 1954. It is commonly depicted as a favorite among Western Terrorists and mercenaries. The original Uzi is quite large at 18.5 inches long with the stock collapsed, and progressively smaller versions were later produced, these being the Mini Uzi and the Micro Uzi; the latter is often regarded as a machine pistol rather than a true SMG, and has a semi-auto only variant, the Uzi Pistol. A carbine version of the original Uzi with a 16 inch barrel also exists.

Back to Cool Guns

Retrieved from "https://allthetropes.org/w/index.php?title=Cool_Guns/Submachine_Guns&oldid=1939700"
Categories:
Cookies help us deliver our services. By using our services, you agree to our use of cookies.