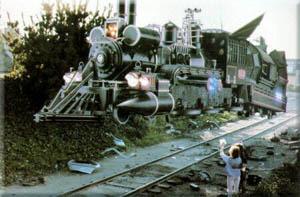 Well, lots of these are actually only Cool Locomotives—including the one to the right—but hey, let's not split hairs.

Primarily a feature of Steampunk settings, the Cool Train may only be able to run on rails—and generally is not under the control of the traveling character—but that doesn't stop it from being loaded with gadgets or just being generally awesome. Just ask a Rail Enthusiast.

Afterlife Expresses can also be Cool Trains, even if they aren't the hippest trip in America.

Not to be confused with The Cole Train. Compare Steam Never Dies.

Examples of Cool Train include:

Retrieved from "https://allthetropes.org/w/index.php?title=Cool_Train&oldid=1676086"
Categories:
Cookies help us deliver our services. By using our services, you agree to our use of cookies.