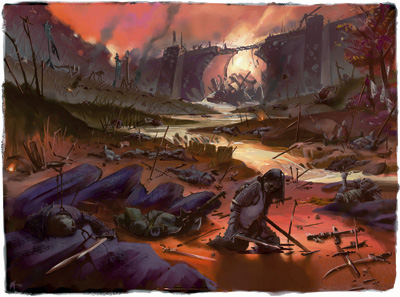 Classic outcome at local mall on a Black Friday

When a great battle, massacre, or terrible cataclysm occurs, sometimes the race involved forgets, but then again, sometimes the land doesn't, and becomes possessed by the misery of the departed.

A Corpse Land is called this mostly because the bodies of the dead are ever present. No matter how many are buried, more seem to just appear, still gored and disease ridden, attracting scavengers that become manipulated puppets to the ghosts that haunt the place. In fantasy stories, necromancers are common to find around such places, and no matter how noble the armies involved may have been, they become twisted and malevolent, even attempting to relive their final events with the bodies of travelers who pass by.

Vegetation fails to grow. Beasts and birds become sick or mad. The land is cursed, forbidden and dangerous.

A hidden form of this may be a Field of Blades.

Examples of Corpse Land include: