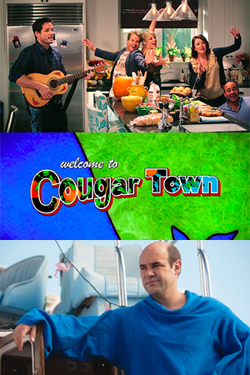 The show initially centered around Jules Cobb (Cox), a newly divorced 40-year-old mother who tries to get back into the dating game after being out of it for 18 years. However, after roughly five or six episodes, this premise was dropped. Since then, the show has mostly focused on the various shenanigans Jules, Ellie (her snarky best friend and neighbor), Laurie (her ditzy younger colleague), Bobby (her ex-husband), Grayson (UST -ridden single neighbor), Andy (Ellie's husband and Bobby's bromantic best friend), and Travis (her 18 year-old son, the Only Sane Man) involve themselves in, ranging from morning drinking, to the glorious game of Penny Can, to a massive drop-everything $2,000 balloon chase that spans multiple episodes. Can be considered a bit of a Spiritual Successor to Scrubs, in overall tone, humor, and penchant for amazing musical selections.

Each episode has two or three plots and sub-plots, some only given 2 minutes or so (which is good, because it doesn't matter at all.) While it is surrounded with tropes, the "deadbeat dad" tends to be rather wise and the loser son also is not that much of a loser.

Needs More Love, especially since the second and third season are much more polished & refined the first season, with the writers working out the kinks. Fortunately, TBS has picked up the show for a fourth season shortly after ABC cancelled it. It will move to cable in 2013. They now apologize for the title.

Tropes used in Cougar Town include:

Jules: What if we're not around next fall? What if a new group comes in and replaces us? Everybody's goitn to be like, "What happened to the Cul-de-sac Crew? I missed them. And who are these new people? They're not as good."

Ellie: He is a devil baby! I don't know what happened!

Laurie: Oh, hey, Rach. Now, bear with me, I have to order for everyone: Okay, I'll have one Soy Largie, one Teeny Tiny, one Teeny Teeny Tiny Unleaded, one Plain Jane, extra Yum-- what the hell, make it a double Yum-- Uhhh, a Baby Joey, a Midnight with a Full Moon (hold the pumpkin), a medium coffee, I need a Heavy D, in a travel mug, please, two Crazy Ivans, a Sauron's Eye-- also, I need a Damn! and an iced Damn!, a Sneaky Pete, a Double Drip with a snip of whip, and a Frap-Cap, heavy on the (imitating the blender) crcccrcccrcrch! crcrcrrrchcrcrch! Oh, and let's see, what's fresh? Okay, well I'll take three Raisin Happy Muffins, a French Moustache, and-- ugh, a Fart Muffin, that is not for me. Oh, and I forgot to order my own coffee! Can I get a Taye Diggs, which is black and extra strong and smooth, but also very sweet?

No, it's not just Scrubs in Florida with a lot of wine.

Ellie (to Andy): If you're leaving me for him, don't drag it out. Just do it.

Travis: ...but we drove there.