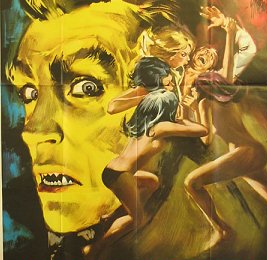 A real lady killer, he is.

A pair of horror movies from MGM about said titled vampire

The plot of the movies were pretty much the same. Yorga would arrive in a new neighborhood and insert himself among the residents. He then set his sight on a certain female character, though starts off feeding on her (usually female) friends, turning them and adding to his undead harem. Soon some of the heroes find out what going on and set out to stop him.

If it all sound familiar, that because it is essentially a 70s take on Dracula. Though Yorga was much more genre savvy, cunning and suave. Two films of the series were made. Count Yorga (Original Title: The Loves of Count Yorga) and The Return of Count Yorga. Though neither movie share any continuity with each other, being stand alone stories. Both are very good popcorn horror movie flicks despite the low budgets.

Tropes used in Count Yorga include:
Retrieved from "https://allthetropes.org/w/index.php?title=Count_Yorga&oldid=1730624"
Categories:
Cookies help us deliver our services. By using our services, you agree to our use of cookies.