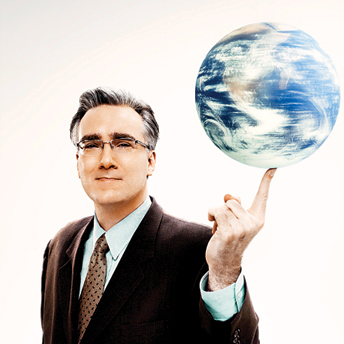 Introduced as Countdown:Iraq, this hour-long show evolved into an opinionated political program that saw itself as a left-wing foil to Bill O'Reilly, Sean Hannity, Glenn Beck, et al. Stories were given in "countdown" order:

Not to be confused with Countdown, a long-running British Scrabble-esque Game Show on Channel 4 that largely concerns itself with bad puns and inoffensive anecdotes.

Keith used to work on Sports Center and was the inspiration for at least one of the anchors on Sports Night.

In early November 2010, Olbermann came under fire at MSNBC for donating $7,200 to political campaigns without first getting permission from the network. He was suspended indefinitely at first, but following intense controversy the subsequent weekend it was announced that he would be reinstated after only two broadcasts.

Suddenly, and without warning, Countdown was canned on January 21, 2011, and Olbermann left the network. This was the same week when cable TV operator Comcast acquired MSNBC from GE, and Olbermann had previously expressed a negative tone toward Comcast. He then joined Current Media, and Countdown relaunched on Current TV on June 20th.

On March 30, 2012, Olbermann was fired from Current TV. Legal action, according to Olbermann, will be happening soon. It's unclear what he plans to do with the show in the future, though it seems he hasn't ruled out another channel.

Please use the Rule of Cautious Editing Judgement when adding examples to this page.

Tropes used in Countdown with Keith Olbermann include:
Retrieved from "https://allthetropes.org/w/index.php?title=Countdown_with_Keith_Olbermann&oldid=1825607"
Categories: