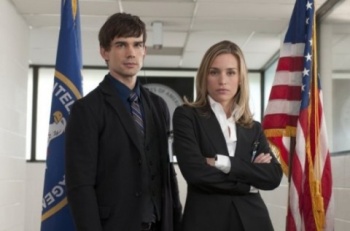 Auggie and Annie are ready for work.

As per USA formula, Annie is surrounded by a cast of quirky characters: Auggie Anderson, a field agent who was blinded on a mission and now works Mission Control; Conrad Sheehan (only in the pilot), Annie's superior agent; Joan and Arthur Campbell, the respective head of the Domestic Protection Division and CIA itself (and troubled married couple), Jai Wilcox, who follows in his CIA legend dad's footsteps, and Annie's sister Danielle, who doesn't know of her life in espionage.

The Myth Arc concerns Annie's Dear-Johnning ex-lover Ben, who influenced her decision to join the CIA and has a Mysterious Past.

Tropes used in Covert Affairs include:

Auggie: I'm assuming by the silence and the stiletto in my shin, I'm assuming Jai has joined us. ...I'm off to do...anything else. (leaves)

Auggie: And leave me all alone?
Annie: Oh please, there'll be a pretty woman next to you before I even cross the bar.
Annie takes a half-step away and a pretty woman immediately steps into frame and takes a seat next to Auggie.

Danielle: "He's like the George Clooney of wherever he's from!"

Want more scenes of shirtless Auggie? Go to our website!

"And this is when you steal some poor hapless peasant's vehicle; his only worldly possession."