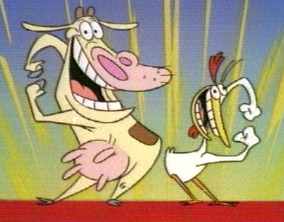 Cow and Chicken was an animated television series, running from July 1997 to July 1999. Cow and Chicken are sister and brother, a cow and a chicken, with human parents. The creators were faced with the question of whether and how to explain this scenario. Sometimes opening credits are cumbersome vehicles for an origin story. David Feiss approached this problem in the series' opening title sequence:

This is all that is ever offered in explanation, although in one episode, their father threatens to send both Cow and Chicken back to 'the orphanage'.

Cow and Chicken's extended family consists of various other types of animals, including Cousin Boneless, who is a boneless chicken (unable to walk or get up from the floor); Snail Boy, a snail; Cousin Black Sheep, a sheep; and Sow, an evil pig. They also have an uncle Longhorn Steer, who appears in "Professor Longhorn Steer". The episode "Happy Meat" also showed the ghosts of a pair of Cow and Chicken's ancestors, a male (human) farmer married to a female chicken. Friends and close associates include Chicken's two buds Flem and Earl, and a loud and obnoxious school teacher. And then of course, there's the Red Guy, who they run into frequently in various guises.

Initially, the show included a Three Shorts format with two Cow and Chicken episodes and one of I Am Weasel. Later on, I Am Weasel was spun off into its own series.

Tropes used in Cow and Chicken include:
Retrieved from "https://allthetropes.org/w/index.php?title=Cow_and_Chicken&oldid=1138827"
Categories:
Cookies help us deliver our services. By using our services, you agree to our use of cookies.