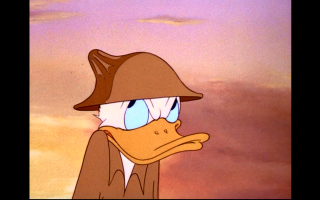 In a classic cartoon, any non-fatal (which is to say, just about every) head injury immediately results in a huge swelling the size of an orange or larger, usually pushing its pink, fleshy way through the victim's hair. Sometimes they come pre-bandaged. May also erupt in the exact shape of the object that caused them. Attempts to shove the lumps back into one's head will usually be answered with a lump of equal-size appearing on the other side of the head... or sometimes somewhere else entirely.

Occasionally further damage will make the lump grow into an obelisk shaped little mountain, or cause the lump to sprout another smaller lump. These can happen multiple times in a row, causing either a very tall bump, or a little cactus-like appearance.

Unfortunately, a Truth in Television, as a hard hit to the head can result in a swelled bump, which, if unlucky, won't go away for a long time. Animated mediums tend to exaggerate this though.

Not to be confused with Your Head Asplode.

Examples of Cranial Eruption include:

Retrieved from "https://allthetropes.org/w/index.php?title=Cranial_Eruption&oldid=1913328"
Categories:
Cookies help us deliver our services. By using our services, you agree to our use of cookies.