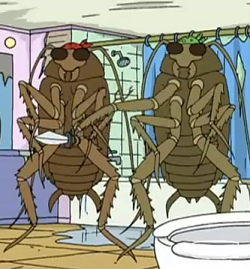 Those are some bad roaches.

We all know bees can be horrible, centipedes terrifying, and flies just annoying. But cockroaches are perhaps the biggest household pest of them all.

They crawl, they swarm, they eat leftover food, they stink, and they scatter when exposed to bright light. Roaches are also incredibly hardy—some being able to survive without food for about a month—and very adaptable to many environments, preferably those that are warm and moist. Often times this is exaggerated in fiction in that they are able to survive a nuclear war (though roaches can withstand radiation poisoning for a long period of time, they are not immune to its effects). They're also used as a symbol of filth and decay in fiction.

Examples of Creepy Cockroach include: