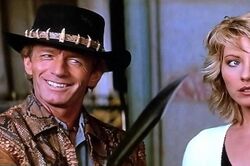 Before Crocodile Hunter, there was... Crocodile Dundee, a 1986 film, directed by Peter Faiman.

Sue Charlton (Linda Kozlowski) travels to Australia to do some research on a story she'd heard about a man who survived a vicious crocodile attack in the bush. Who she finds is Mick "Crocodile" Dundee (Paul Hogan's first film role), a quick-witted bushman who, it turns out, did not lose his leg to the vicious croc - but who seems to have an uncanny symbiosis with the Australian Outback.

When Sue must return to New York, she invites Mick to accompany her, and Hilarity Ensues when she sees that he is not so accustomed to the city as to the bush. Ultimately, she falls in love with the charismatic Australian, but must decide whether to go with him back to Australia or remain with her current boyfriend.

A sequel followed in 1988. The second film has Mick, now living in New York, running afoul of a gang of vengeful drug dealers. After humiliating them on their home turf, he's told by the police to go into witness protection, but instead leads them back to Australia where his superior knowledge of the Outback will prove to be advantageous. A third film appeared in 2001, Crocodile Dundee in Los Angeles. Mick and Sue are married and have a son: Mikey Dundee (Devon Fitzgerald). They live in the Australian Outback, where Mick is wrestling crocodiles for a living. When Sue is offered a major position in a Los Angeles newspaper, she jumps at the opportunity. But all is not right. Her predecessor was murdered, and the case remains unsolved. The Dundees have to perform their own investigation.

Tropes used in Crocodile Dundee include:

Charlie: Tell Mick if he want his clothes back, he can climb down there and get them his bloody self.

[Aborigine speaks in Aborigine]
Charlie: No mate we just hold them.
Sue: What did he say?
Charlie: [winking] He wants to know if we're allowed to eat these men.

Neville Bell: "Oh no, you can't take my photograph."
Sue Charlton: "Oh, I'm sorry, you believe it will take your spirit away."
Neville Bell: "No, you got lens-cap on it."

Dundee: "Son, you have any idea how quick you have to be to catch a tigersnake?"
[Dundee grabs their guns, then he and his friend jump on top of their car and break the roof down on top of them. Finally, they toss a huge garbage can on top of the car.]
Dundee: "Who's getting mugged?"

Arthur: My people have ways of talking that no white man can understand.
[Arthur pulls out a mobile phone and starts talking to his mate]
Dundee: Ah, I think we just found out which one of us is the white man.

Dundee: Leroy here tells me you lot are the coolest gang in New York.
[the gang makes noises of appreciation]
Rat: That's the word.
Dundee: ...what did you do last night?
Gang member: We didn't do nothin'. We was here all night.
Dundee: And that's what you call cool, is it?
[Rat says nothing, but has a thoughtful look on his face]
Dundee: Tomorrow, if someone asks the same question, you can say, "We didn't do nothin.'" Or you can say, "We went out to Long Island and helped this lunatic storm a fortress."

Dundee: Who painted this?
Curator: Pablo Picasso.
Dundee: I'm a drinkin' man myself, but I've never been that wasted.