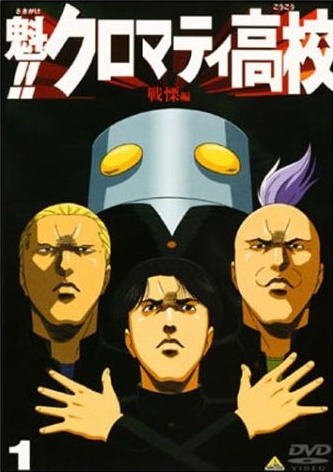 I see a little silhouetto of a can...

Cromartie High School is a bizarre High School comedy Anime and Manga series, set in a school populated by the "worst" delinquents in Japan.

The denizens of Cromartie are all about looking tough, acting tough, rumbles, fights and all that gangster stuff. Mostly, they just talk a good game, and the action centers on Seinfeldian Conversations, (very) weird stuff happening, and a plot about as coherent and logical as Excel Saga played backwards.

The art style is cribbed heavily from classic fighting Manga such as Fist of the North Star and Crying Freeman. Characters often have inner monologues held in a Tableau, as they look off into the distance, only to be interrupted by yet another crazy situation.

Even stranger than the delinquents themselves are the oddball creatures that wander the halls. There's Mechazawa, who is a trashcan-like robot, but neither he nor his friends even seem to realize it; the protagonist hasn't worked up the courage to ask about it directly. Cromartie's other students include aliens, monkeys, and some dude who is very obviously Freddie Mercury on a horse.

The series runs in ten-minute episodes. Thirteen volumes of the original manga and a box set of 26 anime episodes have been released in America as of this writing, as has the Live Action Adaptation film Sakigake!! Cromartie Koukou (which makes about as much sense as the original material).

See The Ping Pong Club for a similar series.

Tropes used in Cromartie High School include:
Retrieved from "https://allthetropes.org/w/index.php?title=Cromartie_High_School&oldid=1719543"
Categories:
Cookies help us deliver our services. By using our services, you agree to our use of cookies.