Everything About Fiction You Never Wanted to Know.
(Redirected from Crossbone Gundam)
Jump to navigation Jump to search 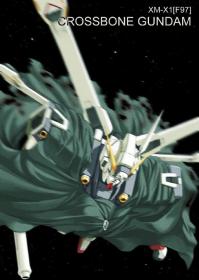 You have two choices. You can forget everything you've seen here and go back to Earth... Or you can come with us and learn the truth.

A Manga follow-up to the film Mobile Suit Gundam F91, written by Yoshiyuki Tomino and with art by Yuuichi Hasegawa, Mobile Suit Crossbone Gundam takes place ten years after the Cosmo Babylonia war depicted in the movie and follows Tobia Arronax, a space colony-born Ordinary High School Student who, during his first visit to the Jupiter-sphere colonies, becomes involved with the Crossbone Vanguard, a group of Space Pirates (utilizing stolen Mobile Suits, along with two powerful Super Prototype Crossbone Gundams) who are locked in a struggle against the Jupiter Empire, an aristocracy that is secretly plotting to invade the Earth-sphere.

After meeting the Vanguard's Ace Pilot Kincaid Nau and their Captain Berah Ronah (actually F91's Seabook Arno and Cecilly Fairchild under assumed names), Tobia decides to join up with them and stop the Empire's scheme. Unfortunately, things take a turn for the worse when it turns out that the Empire isn't quite up to what the Vanguard thinks they're up to...

Crossbone Gundam, sometimes called Gundam F97, is one of the most popular spinoffs of the Gundam franchise, on both sides of the Pacific. The general sentiment is that the series represents Gundam at its peak: characters, storytelling, action, drama, and comedy all come together well, without the concerns that usually hobble the televised chapters of the saga (such as desire to sell toys). The fact that it's one of the few Gundam stories handled by Tomino to avert his usual Kill'Em All ways might also be a factor.

The manga ran for 26 chapters in the Kadokawa Comics A magazine and was later compiled into six tankoubon volumes. It also has sequels: