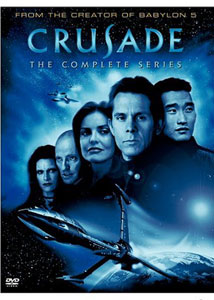 Spin-Off from Babylon 5 telling the story of the spaceship Excalibur and the search for a counteragent to/cure for a slow-acting biological weapon that had been successfully deployed against the Earth in the B5 movie "A Call to Arms". Crusade retained two characters from that movie, Galen the techno-mage and Dureena Nafeel the alien thief. Despite its unfortunate resemblance to Uchuu Senkan Yamato (Star Blazers in North America), Crusade showed promise before its premature death (only 13 episodes were completed out of a planned five seasons).

This being said, the series suffered terribly from Executive Meddling - it was commissioned by a network whose understanding of the series pretty much stopped at "We'll be rolling in money if this is as popular as Babylon 5 was," and then later learned that this wasn't the case anyway -- and the relationship between creator/producer J. Michael Straczynski and the network broke down completely while the first season was still in production. By the time the series went to air, it had already been cancelled.

Amusingly, this level of Executive Meddling made it into the screenplays : In several of the episodes, the situations the characters run through resonate with the situation in which the creator was deadlocked with the network, and some of the corresponding dialogue is acidic, to say the least. Then again, if the author had resigned to the notion that he wasn't going to get the series to fly, why not have some fun while at it?

Not to be confused with the second book in the Destroyermen series, or the historical Crusades.

Tropes used in Crusade include:
Retrieved from "https://allthetropes.org/w/index.php?title=Crusade&oldid=1918446"
Categories:
Cookies help us deliver our services. By using our services, you agree to our use of cookies.