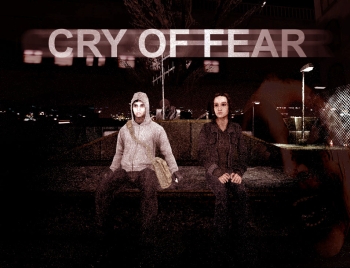 Cry of Fear is a horror Half Life mod from the same developers who brought you Afraid of Monsters, released on February 22nd, 2012.

The mod takes place in the capital of Sweden, Stockholm, where something has gone horribly wrong. A depressed teenager named Simon gets hit by a car, and after a nightmare, he finds himself in an alleyway with no idea how he got there - and the only way out filled with abominations.

Its four-player co-op campaign follows four policemen stuck in Simon's nightmare, and it has a Gaiden Game in the form of Doctor's Story, where Simon's doctor vows to destroy the source of Simon's anguish.

Tropes used in Cry of Fear include:
Retrieved from "https://allthetropes.org/w/index.php?title=Cry_of_Fear&oldid=1773853"
Categories:
Cookies help us deliver our services. By using our services, you agree to our use of cookies.