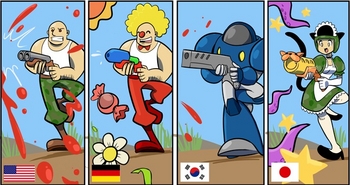 When a show is redubbed for release in another country, the dubbers often will replace the cultural references with others more easily recognized by the foreign audience.

In the best of cases, Cultural Translation will change obscure cultural references that many viewers would not "get" into related, but more familiar, footnotes without interrupting the flow. In the worst of cases, it can come off as a pandering attempt to edit anything vaguely foreign or potentially offensive out, even when the images make it blatantly clear that the characters aren't, and were never, in [insert home country here]. Willing Suspension of Disbelief gets a hard day from overzealous Cultural Translation in a Foreign Remake.

Compare with Woolseyism, where the changes are generally made for aesthetic reasons, and rather than translating the concept, instead replace the original with something completely different but which fits better with the new target audience.

Dub Name Change is a subtrope.

Examples of Cultural Translation include:

It's difficult to get it for a foreigner, but it plays with the differences between Canadian and French pronunciation of the "a" sound.

Retrieved from "https://allthetropes.org/w/index.php?title=Cultural_Translation&oldid=1939444"
Categories:
Cookies help us deliver our services. By using our services, you agree to our use of cookies.