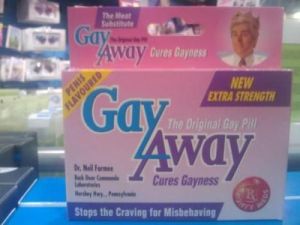 But I wanted to be happy!

The offensive occurrence in fiction of effecting a cure for, or attempting to cure, homosexuality. Such stories often focus on men because Girl-On-Girl Is Hot and most straight male fans don't want to lose that.

There are many variations on this theme, ranging from outright genetic reprogramming to just having sex with a member of the opposite sex. May draw on the Rape and Switch trope, in which homosexuality is a defense mechanism triggered by unwanted (and unpleasant) sexual contact.

Once quite common, this trope is increasingly becoming a Discredited Trope one due to homosexuals in general being moved to the realm of Once-Acceptable Targets as well as some cathartic backlash against the once common idea of "curing" homosexuality.

Does NOT include gay characters who turn out to have been bisexual all along (that is, still find the same sex attractive but are in a relationship with the opposite sex). Nor does it include If It's You It's Okay.

Please, no flaming, and no Real Life examples. Just don't go there, it's not worth it. Flame Wars or flaming in general will be summarily deleted. If you want to know about this in Real Life, feel free to go to That Other Wiki. They have several articles on the subject.

No real life examples, please; at least, not until we have peer-reviewed medical evidence that this could be possible.

Examples of Cure Your Gays include:

Retrieved from "https://allthetropes.org/w/index.php?title=Cure_Your_Gays&oldid=1766777"
Categories:
Cookies help us deliver our services. By using our services, you agree to our use of cookies.