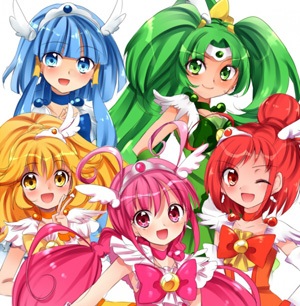 This is something of a logical counterpart to Common Eye Colors: If a character has freaky, cool, or otherwise unusual hair colours, their eyes are liable to match. "Unusual", of course, needs to be taken with a grain of salt when it comes to Anime Hair. Comic books and western animation are also likely to display this trope.

Some series use this to make a character stand out as being "weird" or "different", especially if it's an uncommon color. Others use this for their entire cast.

May be used as a form of Technicolor Eyes.

Not to be confused with the carpet matching the drapes.

Examples of Curtains Match the Window include:

Retrieved from "https://allthetropes.org/w/index.php?title=Curtains_Match_the_Window&oldid=1842488"
Categories:
Cookies help us deliver our services. By using our services, you agree to our use of cookies.