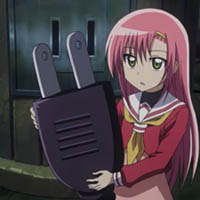 Considering how much our society relies on computers and machinery, it makes sense that we have often considered the possible effects of such things being used against us. Thus, we have many stories where a computer runs rampant or a bomb is set to explode, or someone just built your average everyday doomsday machine.

But there's hope yet. Machines simply don't work unless they have a power supply. Thus, when in such a dangerous situation, even if there's no Big Red Button available for the hero's pushing pleasure, it is still possible for the hero to escape the predicament without a scratch.

All you have to do is unplug the thing. Simple as that.

Scenes in which characters Cut the Juice usually fall into one of three categories:

So really, this trope is used in just about any situation where it can be effective or dramatic. Now if only we could do the same thing with those pesky robots...

See also Have You Tried Rebooting.

Examples of Cut the Juice include: