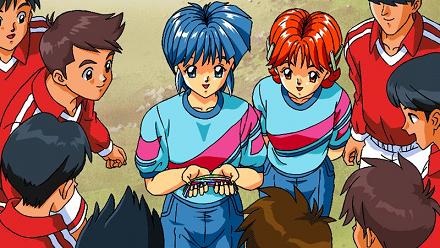 Misangas for everyone, made by your lovely manager!

A High School Stock Character, the Cute Sports Club Manager is the equivalent of the Team Mom for the high school sports club of which she's part. She holds important various roles for the cohesion of the club: cleaning and buying equipment, preparing energy food, keeping tabs on the players' data, and providing moral support to said players.

Usually a pretty and good-hearted girl, she's loved and respected by the club's members. She may be seconded by one or two female assistants (more often than not her underclassmen) who act as her Lancer(s), or as either her girly girl or her tomboy, depending on the girl's own personality traits.

There are two common variations of this character:

1) She's the official team manager who is actually part of the school system. There, the Cute Sports Club Manager has a good chance of becoming an Official Couple with the story's club player main protagonist, even more so he's the team's captain, such as the Kendo Team Captain. Her assistant(s) and the other club players will then usually go Shipper on Deck for the two.

2) She's the coach's daughter, acting as the unofficial manager of the team. This variation tends to have her be a Tomboy and a sports nut, and either too young to be a viable love interest, or off limits because the coach would kill you (though this has the possibility of romance drama too).

It's not rare for both variations of this character to, at a point, make lucky charms such as hachimaki or misangas for every member of the team. The one she'll design specifically for her love interest will usually have an extra feature or be better made than the others.

A Stock Character in High School sports-themed Manga, Anime and Dating Sims (usually seen in works of The Eighties and Nineties).

In the West, this fits as a Discredited Trope. It was popular in The Fifties, with such girls functioning as The Chick (or a mix of Chick and The Smart Guy) in an all male squad. She usally took the form of team managers, water girls, cheerleaders and fraternity sweethearts. Nowadays such characters are much less sympathetic, usually the Alpha Bitch.

An Always Female trope. Since most sports teams are for a single gender, this is often the only way to bring a female lead into a male team, thus another reason why she's so shippable.