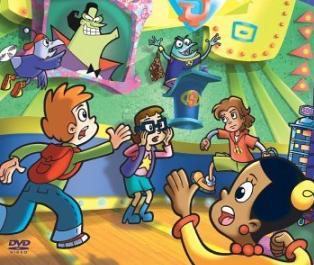 The series revolves around a trio of kids, Jackie, Inez, and Matt, and their robotic bird friend (known as a "cyboid") Digit, who go Inside the Internet. They have been called upon by Motherboard to help defend and repair Cyberspace from the evil schemes of The Hacker, who is not a playful one, or even human, but an evil cyborg whose goal is to conquer all of Cyberspace and spread chaos. The Hacker used to be Motherboard's assistant; however, he tried to destroy her by downloading a virus into her. Luckily, her firewall was able to stop the damage from being too severe, but still left her in a weakened state, thus forcing her to recruit Jackie, Matt, and Inez from Earth to help defend Cyberspace.

Most episodes involve the children traveling to a unique "Cybersite" (a planet-like body in Cyberspace) to thwart the Hacker's latest scheme. The original general Story Arc involved the kids trying to retrieve a new and rare Encryptor Chip (a device of Motherboard's destroyed by Hacker's virus, that would enable her to completely recover). Recent seasons have shifted focus to Hacker trying to reverse his decayed villain image, and a newer villain, Ledge, trying to usurp Hacker's spot as the top villain in Cyberspace.

On PBS airings, the episodes end with a live-action segment (called "Cyberchase For Real"), where a pair of recurring characters (Harry and Bianca) and their recurring nemeses (Harley and Sleazé) demonstrate how the episode's math lesson can be used in their own lives.

Tropes used in Cyberchase include: