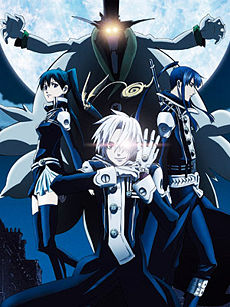 The heartwarming story of young Allen Walker and his fiancée, Lenalee Lee... aah, who are we kidding here?

D.Gray-man is a manga (later adapted into an anime) about Allen Walker, a 15-year-old Exorcist with a grotesque-looking left arm which can transform into a weapon called Innocence. Allen fights against the Millennium Earl and his Akuma: living weapons created by trapping a human soul inside a mechanical body using Dark Matter, and having it wear the skin of the human that created it in the first place. The Millennium Earl wants to use these to destroy humanity, and Allen, who was cursed by an Akuma as a child, is caught in between. The Black Order, which he joins early in the series, is a religious organisation of Exorcists that seeks to stop the Earl and destroy his Akuma using Innocence. As the story progresses, a conspiracy unfolds involving the Noah Family - a group headed by the Earl - and the mysterious "14th" Noah.

Written by Katsura Hoshino, the series is known and loved for blending typical shonen action tropes with a gothic sensibility and a sense of design that borders on the surreal. Tends to go on hiatus a lot due to Hoshino's bad health, so updates are a bit unpredictable. The most recent hiatus ended on August 17, 2010, wherein she released a 50 page chapter. The series has now switched to a monthly schedule.

For the same reason, the Animated Adaptation ended in 2009 after 102 episodes, in the middle of volume 16. An uncancelling is unlikely at the moment, but some fans still hope to see it again.

Tropes used in D.Gray-man include:
Retrieved from "https://allthetropes.org/w/index.php?title=D.Gray-man&oldid=1657176"
Categories: