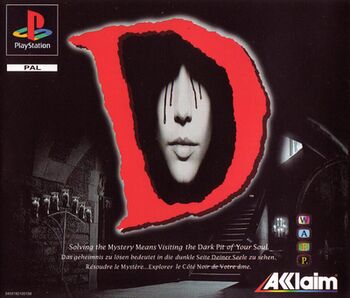 In the mid-nineties, inspired by the rise of Full Motion Video and the concept of treating video games as interactive movies, Kenji Eno decided to take what he deemed the next logical step: creating a digital actress. Laura would go on to star in three games, Enemy Zero and D2, portraying a different character with a different surname each time. After D2's commercial failure, its publisher, WARP, folded, bringing Laura's career to an end.

D tells the story of Laura Harris, a college student. While attending school in San Francisco, she recieves word that her father, the respected Dr. Richter Harris, has started randomly murdering everyone at his Los Angeles hospital. Rushing to the scene, she enters the hospital and is confronted by a bloody scene... one that swiftly alters to a mysterious abandoned castle. Despite visions of her father warning her to leave, she makes her way deeper inside, coming ever closer to the Awful Truth of what exactly caused her father's rampage...

Tropes used in the D series include:
Tropes used in D (video game) include:
Retrieved from "https://allthetropes.org/w/index.php?title=D_(video_game)&oldid=1670190"
Categories: