Everything About Fiction You Never Wanted to Know.
Jump to navigation Jump to search
/wiki/Dan Greencreator 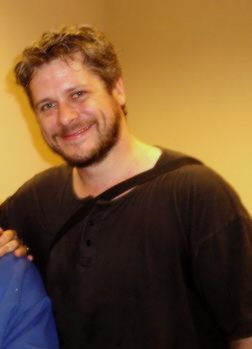 I have my own page now because I AM DAN GREEN!

This page needs no description because it's voiced by DAN GREEN.

OK, maybe it does. Dan Green is a voice actor from New York who works for 4Kids. Green is most known for his 3 vocal ranges: normal, Shota, and Large and In Charge. The last one is especially famous because his Cheesy Awesome voice acting for Yami Yugi in Yu-Gi-Oh! was so fabulous it propelled him to Internet stardom, making him currently on par with Crispin Freeman, Scott McNeil, and Christopher Sabat as the Ensemble Big Guys of Voice Acting.

Either he or someone with his name inks/has inked comic books.

His wife Michal Friedman has recently passed away after giving birth to twins (and to make it worse for him, she died around 2011's Thanksgiving). If you could donate that would be great, or at least say a few words to him and his family. Here's the guestbook

Dan Green has performed in the following roles:
Retrieved from "https://allthetropes.org/w/index.php?title=Dan_Green&oldid=1653334"
Categories: