Danger Days: The True Lives of The Fabulous Killjoys 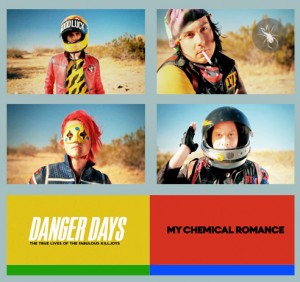 Danger Days: The True Lives Of The Fabulous Killjoys is the fourth studio album by My Chemical Romance. The concept of the album is based around the lives of the 'Fabulous Killjoys' with each band member posing as a different member. The Killjoys are a group of outlaws who are fighting against the evil corporation Better Living Industries (BL/ind.) led by Korse, in the year 2019. Their guide is pirate radio DJ Dr. Death Defying. A website for Better Living Idustries was launched in mid-November, betterlivingindustries.jp, featuring a mission statement, a report from the Zones and a merchandise store.

In terms of music, Danger Days is very much a lighter and - wait, no, that doesn't quite fit. It's definitely less wangsty than previous MCR albums, even with the requisite rock opera ending, and while many tracks keep the anthemic feel of their previous works, they're infused with a straightforward high-octane, raygun-laden psychotronic enthusiasm that has even managed to win over a somewhat-vocal portion of the band's previous hatedom.

The Fabulous Killjoys and others

Tropes used in Danger Days: The True Lives of The Fabulous Killjoys include:
Retrieved from "https://allthetropes.org/w/index.php?title=Danger_Days:_The_True_Lives_of_The_Fabulous_Killjoys&oldid=1723716"
Categories: