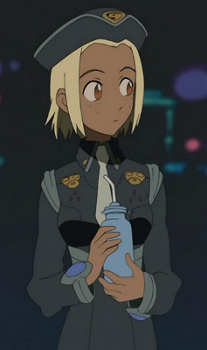 Cousin of the Dark-Skinned Redhead, opposite of Raven Hair, Ivory Skin and the Eerie Pale-Skinned Brunette. If the series is matching Hair Colors to personalities, the DSB is often a Dumb Blonde if female (whereas the DSR is often hotheaded). The trope may have some relation to the Ganguro fashion trend that took over Japan for part of the 90s, consisting of bleached hair and an artificial tan.

The addition of a DSB in the cast often adds a foreign flavor to the show, and it is not uncommon for the DSB to be of uncertain or dubious origin. The fact that very few people in real life have this natural combination of hair and skin helps to create this impression, with the exception of surfers or others who spend lots of time in the sun, as the sun bleaches hair and darkens tans, sometimes to extreme degrees. It's also common for a DSB to be of mixed heritage and have their appearance handwaved through this, but more often than not, it just goes unexplained; light hair on dark characters is simply easier to draw and frames the face very well.

The trope also shows up with some frequency in Western works (either animated or live action), where it will either take the form of a very tan-skinned blond Caucasian or a nonwhite person with bleached hair. These characters will often play the role of either The Ditz or the Jerk Jock; in fact, the "arrogant, tanned, blond villain" has been a stock character in Professional Wrestling almost from its inception (see below).

Much in the same way that blonde hair and blue eyes have become the Phenotype Stereotype for Caucasian people, DSB is becoming—perhaps over more realistic choices—common for characters who are supposed to be of Indian or Indonesian descent. Blond hair and dark skin does occur frequently among children in the Aboriginal people of Australia and elsewhere in the South Pacific, but it usually darkens with age—see here for a Real Life example.

Incidentally, any skin/hair combination darker than "peaches and cream" and lighter than "auburn" can go here. (Light brunettes with dark skin may also fit, but that's pushing it.)

Examples of Dark-Skinned Blond include:

Retrieved from "https://allthetropes.org/w/index.php?title=Dark-Skinned_Blond&oldid=1842469"
Categories:
Cookies help us deliver our services. By using our services, you agree to our use of cookies.