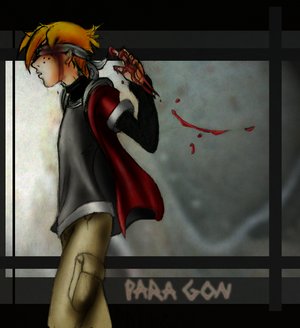 Ron Stoppable, trying to walk off his double serving of Eye Scream.

Deliberately writing a serious version of events related from a story which was originally quite lighthearted, "serious" in this case being more bleak, horrific, dark and/or possibly sadistic. Indeed, Dark Fic veritably wallows in (or savors) misery and darkness. This is sometimes satire, based on memes, or just writers flexing their creative muscles and showing us certain canonical elements that have the potential to be Nightmare Fuel. Or maybe the writer just enjoys depressing people with their writing style.

When badly done (especially when the original work was a comedy), it will do nothing but Squick readers, who will quickly abandon it. Or make people laugh. Well done, though, it can provide an intense and unsettling view of something supposedly familiar.

Contrast with Fix Fic. A Dark Fic may or may not be the end result of a Deconstruction Fic.

Comedies or series on the "idealistic" side of the Sliding Scale of Idealism Versus Cynicism tend to inspire Dark Fic; similarly, "realistic" or darker stories inspire WAFF fanfic.

Examples of Dark Fic include:

Yomi: Tomo-chan, my best buddy in the whole world, wait for me so we can 'team up'! I'll introduce you to my new friend, Mr. Spiky Bat! He's been wanting to meet you for a real long time. I think you're going to become real close!