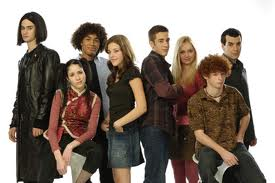 Dark Oracle is a Canadian television series that premiered on YTV in 2004. It follows twins Lance and Cally Stone, a pair of normal teenagers whose lives were turned topsy-turvy by the arrival of a comic book (the titular Dark Oracle) that could predict the future. Every episode a new issue would arrive, resulting in the twins scrambling to head off whatever disaster the comic predicted. Unfortunately, this wasn't always easy, and the comic was excellent at misleading the twins, leading to numerous traumatising (and sometimes downright trippy) experiences. As the series progressed, the stakes grew increasingly higher, until the twins were not only trying to head off episodic problems, but fighting for their very existence.

Season 1 dealt with the comic's initial appearances, and introduced Lance and Cally to their comic book counterparts, Blaze and Violet. Problems were typically episodic in nature, and the only recurring villain was Omen, a sometimes frog, sometimes high-school student who had inflicted the comic upon them in the first place, and professed an interest in Cally. Other recurring characters included the twins' respective best friends Dizzy (Lance) and Annie (Cally), Jack (Cally's crush), Sage, a very odd girl who eventually became Lance's girlfriend, Vern a wannabe-practitioner of the dark arts, and Doyle, a part-time magician and owner of the local comic store, Gamerz Cave. The season ended with Omen's defeat, and the comic apparently erased.

In Season 2, the comic returned, with Blaze and Violet (who had initially seemed to be little more than comic book characters) taking central stage as the new antagonists. The various comic book counterparts began to look a lot more like their real-world equivalents, and set into motion various plans to emerge into the real world while trapping their twins and their friends inside the comic (which leads the comic to add stand-ins for real world Lance and Cally to its cast of characters). The plot became more over-arching, with Lance and Cally trying very hard to head off Blaze and Violet's next moves. Vern became a more important antagonist, Omen returned, and Cally briefly gained a new love interest, Emmett. By the end, Omen was dead, Blaze, Violet and their leader defeated, and the comic permanently erased.

Dark Oracle was praised for its original concept and the generally good quality of its episodes. In 2005, it won the International Emmy for Best Children's and Youth Program. The series lasted from October 2004 to June 2006. A total of 26 episodes were filmed.

Tropes used in Dark Oracle include:

Tropes used in Dark Oracle include:
Retrieved from "https://allthetropes.org/w/index.php?title=Dark_Oracle&oldid=1831796"
Categories:
Cookies help us deliver our services. By using our services, you agree to our use of cookies.