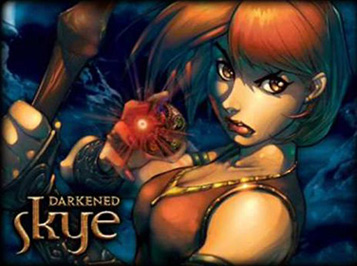 Prepear yourself for one-of-a-kind of game...

At first glance, Darkened Skye looks like your ordinary kind of RPG game. "In the far-off and decidedly fictional land of Lynlora, you play as Skye, a bored shepherdess, who is lamenting her fate of being bored and trying to keep track of all these damn sheep when, suddenly, a commotion off in a clearing attracts her attention. When she goes to investigate, she finds an ancient magical artifact; a flattened spheroid, orange, with an S in the center. She takes it to the local wisewoman, who tells her...'why, it's a Skittles!'"... wait what?

You heard that right, we are talking about the Skittle candies... I'll give you a second to collect your thoughts... Are you done?....

" Skittles are the source of all magic (Fancy you not knowing that!) and gathering them is vital to erase the darkness on Lynlora's sky. So our protagonist, Skye, sets off on a quest to return the rainbow to Lynlora, thereby returning Skittles and magic along with it."

As you probably have already guessed Darkened Skye is an advergame (released for Game Cube and PC) to promote Skittles candies. The game is generally considered average, with not that great of a gameplay, fuzzy controls, unwieldy animations, and occasional bugs. What makes the game worth playing is that the company gave the producers full-freedom, so the writing team was in active revolt over the fact that they were making such a game—the writing is patently hilarious and so tongue-in-cheek that to this day all they can taste is teeth.

Tropes used in Darkened Skye include:
Retrieved from "https://allthetropes.org/w/index.php?title=Darkened_Skye&oldid=1264532"
Categories:
Cookies help us deliver our services. By using our services, you agree to our use of cookies.