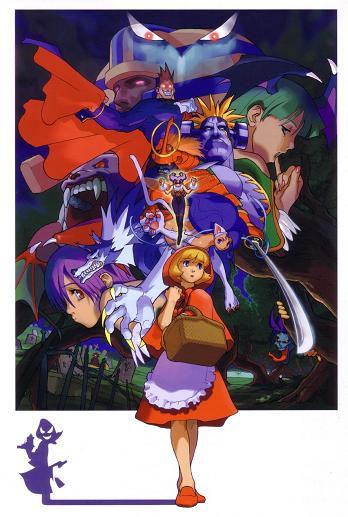 See the cute little girl -- the normal-looking one?
She's the biggest psycho of the bunch.
It's that kind of series.

Darkstalkers is a Fighting Game series produced by Capcom: its first entry was produced during the fighting game craze of the 1990s. In contrast to the martial arts-themed fighting games of the time, the game's characters are (mostly) based on classic literary or film monsters -- including Frankenstein's Monster, the Wolf Man and the Creature from the Black Lagoon -- and boast zany combos and attacks to help set the game apart from others.

This was Capcom's second fighting game franchise after Street Fighter, which means it shares many similarities with its sibling series (Gamepro infamously referred to it as "Street Fighter in a Halloween costume"): numerous characters have similar fighting styles to the Street Fighter cast, and the game features a six-button control scheme. Darkstalkers was one of the first fighting games to introduce the concept of Super Moves, bring air blocking into the mix, and expand basic combos into lengthy streams before any of the Capcom vs. Whatever games were created.

The Darkstalkers series is also notable for having quite a bit of Fan Service, specifically due to Morrigan and Felicia (whose designs are unashamedly provocative -- in particular, Felicia doesn't even wear clothes). Morrigan is likely best known for her appearances in the various Vs. fighting games -- including Marvel vs. Capcom and Capcom vs. SNK -- and even more notorious for having the same sprites recycled for over seven years (which caused her to clash in sprite style with just about everyone else). She received new sprites for Namco x Capcom (which used a slightly Super-Deformed battle sprite style akin to Pocket Fighter before it), and since Tatsunoko vs. Capcom (and Marvel vs. Capcom 3) use 3D graphics, Morrigan's original sprites appear to be dead for good.

A new Darkstalkers game -- as in, entirely new, instead of a re-release of past content -- hasn't been made since 1997. On July 21 2011, Yoshinori Ono said he is pushing Capcom hard to revive the series. In his own words: DARKSTALKERS ARE NOT DEAD! Darkstalkers 4 is also rumored to be in development since that time.

Tropes used in Darkstalkers include:
Retrieved from "https://allthetropes.org/w/index.php?title=Darkstalkers&oldid=1933157"
Categories:
Cookies help us deliver our services. By using our services, you agree to our use of cookies.