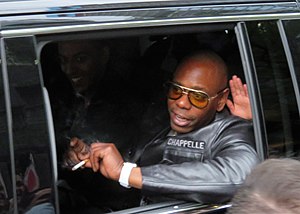 Dave Chappelle was born on August 24, 1973 in Washington, D.C. His first credited role was in Mel Brooks' Robin Hood: Men in Tights as "Ahchoo." He was offered the chance to star as Bubba in Forrest Gump, but he turned down the role, believing that the movie would flop at the box office (a decision he would come to regret). Chappelle wrote and starred in the classic stoner film Half Baked. He is best known, however, for his sketch comedy show on Comedy Central named (appropriately) Chappelle's Show. The show lasted from 2003 to 2006. During this time he came out with several sketches that enjoyed wide success--most famously in which Chappelle plays a disorderly Rick James, driving the phrase "I'm Rick James, bitch!" deep into American culture. Chappelle received two Emmy nominations for his show.

Chapelle's career abruptly stalled when he decided the fame was becoming too much and people were laughing at his jokes for the wrong reasons. He took an unannounced sabbatical in South Africa and then returned home to spend time with his family. He has appeared on stand up stages, talk shows, and occasional independent projects, but he had no desire to reclaim the fame he walked away from at its height for over a decade, before returning in 2017 with multiple Netflix comedy specials; he has been active since.