Everything About Fiction You Never Wanted to Know.
Jump to navigation Jump to search
/wiki/David Brincreator 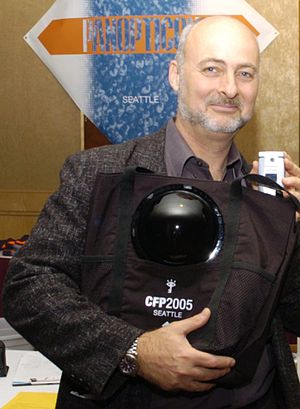 David Brin is an American Science Fiction writer, creator of the Uplift universe. He is also the author of a highly amusing (and packed end to end with puns and references) novel called The Practice Effect, and wrote the storyline to Ecco the Dolphin: Defender of the Future.

Brin gained a measure of notoriety among Star Wars fans for printing a blisteringly critical series of essays regarding that universe's philosophies and messages. These were later compiled into a book with Matt Stover called Star Wars On Trial.

Works written by David Brin include:
David Brin provides examples of the following tropes:
Retrieved from "https://allthetropes.org/w/index.php?title=David_Brin&oldid=1793293"
Categories:
Cookies help us deliver our services. By using our services, you agree to our use of cookies.