Everything About Fiction You Never Wanted to Know.
Jump to navigation Jump to search
/wiki/David Sedariscreator 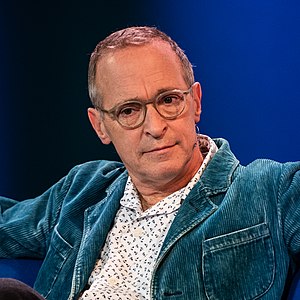 David Sedaris at the Frankfurt Book Fair in 2018

David Sedaris is an American humor writer born in 1956. He is known mostly for his autobiographical essays, which cover a variety of subjects from his childhood and family to his drug-abusing, odd-job-working, performance-art-dabbling-in years to living abroad in France, Japan and the U.K. with his long-time boyfriend, Hugh.

His first mainstream recognition came in 1992 when NPR aired The Santaland Diaries, his story about working as an elf in a Macy's one Christmastime. Since then he's become one of the most popular humorists writing today, including outside the U.S., and has published several books.

His essay collections are:

Various other essays, diary entries and fictional pieces have been published separately or performed live or for radio.

He is a frequent contributor to the Public Radio International show This American Life and to The New Yorker magazine. Amy Sedaris is his sister, and, like the rest of his family, is a character in some of his essays. They've worked together a number of times.