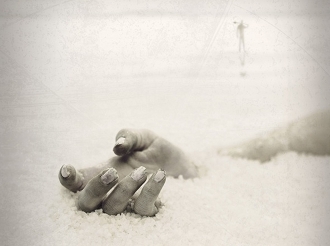 Buried in a salt field; a very bitter end.

This is a stock type of camera shot that is also popular for posters and cover art. The story typically has death or murder as a central element, but featuring a corpse front and center, especially a very maimed one, prominently on the box art is usually not considered a good way to sell. So a compromise is used, an artfully limp and bloody hand is shown, perhaps holding (or dropping) an important object. Of course, the hand may be separate from the body, or itself badly damaged.

Examples of Dead Hand Shot include: