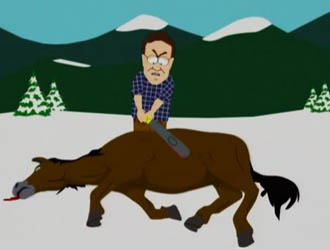 A Trope which has gone way beyond being a Discredited Trope to where the very act of parodying and/or subverting that trope has itself become a trope.

As noted on the Trope Life Cycle page, the progression is generally:

Clever idea → Trope → Discredited Trope → Dead Horse Trope. → Then, if the downward slide continues, it may end up as a Forgotten Trope.

Named for "Beating[1] a Dead Horse" - an old idiom that describes continuing to do something pointless long after it would be obvious to anybody not mentally handicapped/under the influence of the Sunk Cost Fallacy that said course of action will yield no results and is simply a waste of time. For instance, continuing to whip a dead horse in an attempt to get it to wake up and start running - the horse is dead; it's not going to move anymore.

Naturally, Dead Horse Tropes tend to be The Oldest Ones in the Book, too.

If a Dead Horse Trope is still used straight in recent works despite seemingly being subverted or parodied to death, it's an Undead Horse Trope. If it was never really played straight enough to be a trope in the first place, it's a Dead Unicorn Trope. If it's so natural to the medium of storytelling that it can still be played straight no matter how often it's used and abused, it's an Omnipresent Trope. If the trope not only makes viewers/readers groan but also makes them angry, you've probably got a Pet Peeve Trope.

A common cause of Seinfeld Is Unfunny, because it's hard to imagine yourself back into the innocent frame of mind when this was new. A similar trope is Deader Than Disco, where something once extremely popular falls out of popularity and becomes better known for being mocked as a past fad than for its own merits.

Examples of Dead Horse Trope include:

Retrieved from "https://allthetropes.org/w/index.php?title=Dead_Horse_Trope&oldid=1806765"
Categories:
Cookies help us deliver our services. By using our services, you agree to our use of cookies.