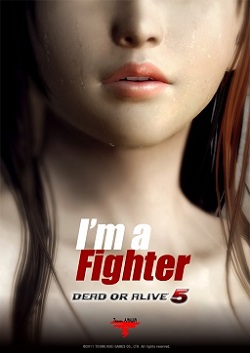 Yes, I really am. Promise.

A big, bouncy 3D Fighting Game franchise akin to Tekken and Virtua Fighter. Even though the male fighters outnumber the female fighters by a slim margin, it's the women who are the real stars of the show.

The actual story is about the dealings of the sinister DOATEC corporation, who hold the Dead or Alive tournament as a front to finance the genetic research in creating the ultimate fighter. A runaway ninja named Kasumi gets tangled in the struggle, using the tournament as a means of escape and to look for her lost brother Hayate, and take revenge on her traitorous uncle, Raidou. Other characters enter the tournament for their own personal reasons, but all get sucked into DOATEC's larger scheme. Ayane, who is also looking for Hayate, is required to kill her half-sister Kasumi (as desertion from a ninja clan is punishable by death); Ryu Hayabusa (remember him?) is looking for him as well; Hayate is trying to recover the memories he lost after being experimented on by DOATEC; Zack's just doing it for the money; and it builds steam from there.

Of course, nobody plays the game for that. They play the game for... well, another reason.

Despite the vast quantities of Jiggle Physics, the game actually has a great deal of independent merit of its own, being much more fast-paced and kinetic than the 3D fighters that it competes with while remaining technical and reasonably well-balanced. It's generally considered in the top-tier of 3D Fighting Games, along with Tekken and the Soul Edge series.

After the fights, they tend to get together and play beach volleyball.

The character sheet is under construction.

The fifth installment is currently under development and scheduled for release during 2012. So far (as of E3 2012) Kasumi, Ayane, Hayabusa, Hayate, Hitomi, Christie, Bayman, Lei Fang, Zack, Bass, Tina and Kokoro have been confirmed and shown to the public. The game has a deep graphic upgrade from Dead or Alive 4 (not surprisingly, since it's been 7 years since then) and an aesthetic redesign that shows more realistic characters, with smaller and less anime-like eyes, the same to what was shown in Ninja Gaiden 3. Special mention to the girls, who have more realistically proportionate bodies, although the Jiggle Physics are still in full display. In collaboration with Sega, Dead or Alive 5 will also feature Guest Fighters from the Virtua Fighter series. As of E3 2012, Akira Yuki and Sarah Bryant are a part of the roster (and this list suggests that Pai Chan will also make the leap).

Tropes used in Dead or Alive (franchise) include:

(Scene: Two Gamers on a Couch.)
Gamer 1: (nervous, interrupted by gameplay footage) Well, I - I only play it for the fighting. I appreciate the expansive... multi-tier environments, the 16 characters with the... the pixel shaded bump-mapping... (Gamer 2 giggles.) and the rich plot development. Seriously, why else would I play it? (Beat)
Gamer 2: She kicks high.
(Scene of Kasumi high-kicking an opponent.)