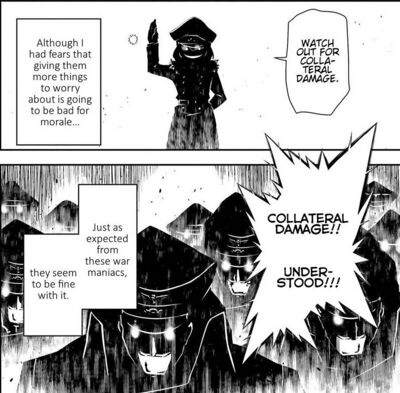 It's not a war crime if it's an accident.

When death or impending death is referred to only in code words, which becomes chilling when the audience realizes what they are referring to. Usually used by sinister conspiracies, powerful gangsters, Dystopian bureaucrats (see also Double-Speak), Paths Of Inspiration or Scary Dogmatic Aliens.

In some cases, the words 'destroyed' or 'erased' may be used, not as a euphemism, but rather because the word 'killed' is insufficient. Usually refers to those who have suffered a Fate Worse Than Death, or an individual who has been killed and wiped from all records.

This is similar to Never Say "Die", but isn't associated with censorship; violent deaths will be shown, or someone will explain the real meaning of the euphemism. It's also the supertrope of Trouble Entendre and Released to Elsewhere.

The opposite of this would be No Longer with Us.

Examples of Deadly Euphemism include:

Retrieved from "https://allthetropes.org/w/index.php?title=Deadly_Euphemism&oldid=1883036"
Categories:
Cookies help us deliver our services. By using our services, you agree to our use of cookies.