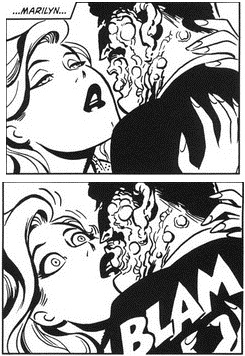 Melvin: Now, who wants a hug?
Tristan: I do!
Yami: Tristan, no! He's just going to stab you or something!


Melvin: Don't listen to him, Tristan. He just wants all the hugs to himself.
—Yu-Gi-Oh the Abridged Series

Bob and Alice meet in secret for a night of passion. Bob draws Alice close, kisses her deeply and...BLAM!

Alice slumps down dead, with Bob holding up a previously hidden pistol. She's just gotten a Deadly Hug. A sudden gunshot is the most common, but a stab is not unheard of.

When a bad guy does this, it's usually during The Reveal that they're evil. When a good guy does it it tends to be a Mercy Kill. A horror variant has the hugger turn into a monster in mid-hug and crush the victim.

Subtrope of Died in Your Arms Tonight. If the killer had some genuine affection for the victim, this may segue into Cradling Your Kill and/or Pietà Plagiarism. May be the result of a Cooldown Hug gone wrong.

Examples of Deadly Hug include: