Everything About Fiction You Never Wanted to Know.
< Deadpool
Jump to navigation Jump to search 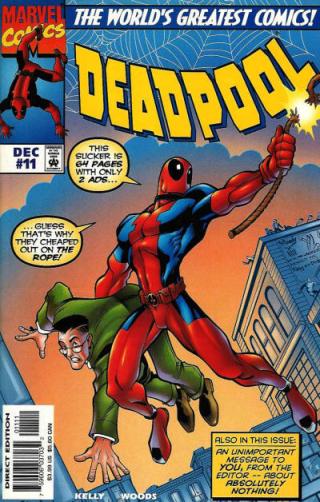 Heya, true believing Troper! This is me, Deadpool, aka The Merc with the Mouth, The Regenerating Degenerate, and The Crimson Comedian. I'm a Marvel Comics mercenary Anti-Hero character, related to the X-Men and Wolverine in particular. I appeared in print for the first time in New Mutants #98 (February, 1991) as a ripoff of DC mercenary Deathstroke the Terminator, but Deathstroke himself was a rip-off of Taskmaster! So score Marvel! But that's old news. I'm all-new, I'm all-different, and boy does that feel good!

I appear in many different comics in the Marvel Universe. Besides my own series—which I'm pretty sure came with foil alt-covers and a collector card—the biggest mutie badasses they've got are lining up to team with the dude who went toe-to-toe with the Incredible Hulk and came out in one piece. Yep, that's me! I can beat anyone! Well... except that #$@#%#$%$ Squirrel Girl. She kicked the mucus out of me constantly. But hey, that's OK! She did that to everybody. Truly, she's the single greatest threat to the multiverse. Well, except maybe Galactus[1]... and clowns. Never forget clowns.

As you're probably noticing just about now, I loooooove to talk. Yes, it's my most valuable asset: the lungs to provide endless witty banter in the heat of battle! In fact, everybody loves to hear me talk!

OK, I know what you're asking yourself: "How could a single -- albeit snappily-suited -- mercenary become so incredibly awesome in so many ways?" Oh, gather 'round, kiddies, this is gonna be good. See, my first big splash was hunting down and killing every single one of the Interweb feebs that thought it would be hilarious to star me in a "Ninja Spider-Man" meme. Caption this, suckers! On the other hand, my own memetic monologues led to me becoming THE BEST SUPERHERO EVER. That and the fact that I always talk to my loyal (but still weaker) fans. Like now, for instance. You lucky, lucky nerds!

Yes, yes, I'm getting to that: "How could a dweebish square like Wade Wilson ever become the sexiest mercenary alive?" Tricky question. Best I remember is some nice ice-cream salesmen told me they could fix my terminal cancer by injecting me with Wolverine's man-juice (and by that I mean his DNA. Perv). Suddenly... -insert Dramatic Fanfare here- No, wait, let's go with that old Six Million Dollar Man thing instead. Yeah, I like that better. Bip-bip-bip-bip-BIP... I became better, faster, strongerer and even got the ability to heal quickly, so that whenever the cancer shows up it instantly gets fixed... which is good, because it keeps showing up. As in instantly after it gets fixed. Yeah, you ladies knew it, right? I am just. That. Charming.

Anyhoo, after a few zillion rounds of this, I became so goddamn handsome that my brain exploded. Eventually, my magical insanity powers allowed me to figure out that I'm a comic book character. From then on, I became BFFs with my thought bubbles, exposition panels, and Stan Lee. My fellow Weapon X classmates had run a pool to figure out which one of us would be dead first, so I naturally named myself Dr. Professor Carlos Winston Lazarus McBatman. Then I realized that I couldn't spell it, so I went with Deadpool instead.

Anyway, so you wanna know my fighting style, huh? Why, being absolutely rassum frassum crazy is my fighting style, kiddies! Don't Try This At Home! Wait... y'know what, go ahead, makes my job easier in the long run. Guns, explosives, guns, my trusty katana, guns, guns, anything I find on the ground, doorknobs, guns, and firearms are all ways I kill people. That is, of course, on the rare occasions my razor-sharp wit hasn't caused them to crumple into sobbing balls of surrender long before that. My good buddy Weasel also provides me with shiny new gadgets that help to kill more, so I can use any power I want.

Also, you better never mistake me for that other psychotic, fourth-wall breaking clown who sided with those DC fellas. You know how many of my stupid Facebook friends ask me to "do that pencil trick"? EVERY SINGLE ONE.

My incredible awesomeness allows me to also transcend print media

Some of the many beautiful tropes that describe me include

Retrieved from "https://allthetropes.org/w/index.php?title=Deadpool/Self_Demonstrating&oldid=1957779"
Categories:
Cookies help us deliver our services. By using our services, you agree to our use of cookies.