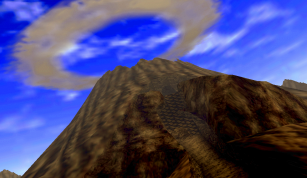 One order of Hailfire Peaks, hold the ice.

A stage in a video game, particularly platformers, that takes place on a mountain or similarly high, rocky place. Thankfully, the usual problems of low air pressure are generally not found in these stages. Instead, natural hazards include falling rocks, crumbling ledges, rope bridges, and of course, very, very long drops. High wind may be a hazard in some places as well. Enemies may include eagles or other high-flying birds, Bighorn rams, and whatever nasty things the world may have living in the inevitable caves.

Death Mountain is commonly merged with other areas. For example, the Lethal Lava Land version is of course a volcano, while others are snow-covered peaks.

Named after the recurring area in The Legend of Zelda series.

Examples of Death Mountain include:
Retrieved from "https://allthetropes.org/w/index.php?title=Death_Mountain&oldid=1483748"
Categories:
Cookies help us deliver our services. By using our services, you agree to our use of cookies.