Death at a Funeral 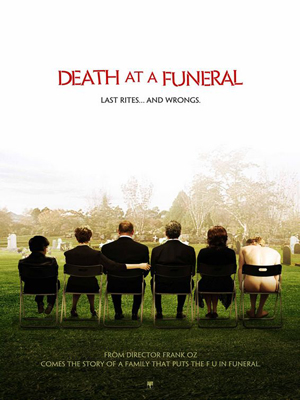 Death at a Funeral is a 2007 British Black Comedy film directed by Frank Oz.

A family tries to give an appropriate funeral for its late patriarch. Cue epic sibling rivalry, accidental acid tripping, dwarf secret gay lovers, nudity, blackmail and caskets being knocked over.

In what must be something of a record for an English language movie, an American remake starring Chris Rock was released just three years later in 2010, which kept the overall tone of a black comedy... but not in that way!

Tropes used in Death at a Funeral include:

The original film contains examples of:

The American remake contains examples of:

Aaron: Our father was having gay sex with a guy who could fit in his pocket... and you're mad 'cause he's white?