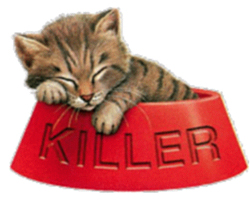 Hobgoblin Cleric: Sir, your odd talking skull is speaking of the Perilous Path of Crushing Doom.


Redcloak: Please tell me it's actually filled with cute fuzzy bunnies, and they just named it that to be ironic.
—Order of the Stick #190

Here it comes. The Harbinger of Death, the Ultimate Evil, It Which Devours Your Soul, Your Worst Nightmare.

Turns out, the creature in question is just a cute animal, with a scary name but completely harmless. Upon further inquiry, you'll learn that it was named by a child, or a Trickster Archetype.

The polar opposite of Fluffy the Terrible. Also compare to Sealed Evil in a Teddy Bear. If it does have the destructive power despite the innocent appearance, it is a Killer Rabbit.

Examples of Deathbringer the Adorable include:

Giles: Don't taunt the Fear Demon.
Xander: Why? Can it hurt me?
Giles: No, it's just tacky.

Miles: ...We try to put this off as long as possible.

"Please do not nuzzle the instrument of my vengeance."