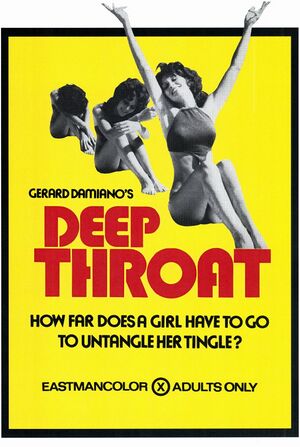 The director of Deep Throat was Gerald Damiano, who apparently spent less than $100,000 to make the film, and made millions. At least one theater in Los Angeles ran it in a double feature with Devil and Miss Jones every day for eight years until the theater was torn down. Some theaters ran it with Behind the Green Door.

Linda Lovelace was the female star, and for some reason, Ron Jeremy, who merely appeared in the film as an actor, was prosecuted over the displaying of the film in theaters, supposedly because it was obscene.

Tropes used in Deep Throat include:
Retrieved from "https://allthetropes.org/w/index.php?title=Deep_Throat&oldid=1556335"
Categories: