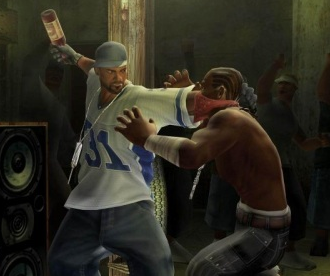 Method Man is not having a good day.

The first game, Def Jam Vendetta, was developed by AKI Corporation (known for their wrestling games in the West). Released in 2003 for the GameCube and PlayStation 2, the concept for the game is a combination of professional wresting and hip hop. In the game, the player has to pick from four different characters to use in the story mode. In the story, the protagonist's injured friend Manny calls them to ask that them take his place in an underground street fight, and to help him pay a debt to the underworld boss D-Mob. In the end, after they've beaten all of the other fighters, the protagonist faces off against D-Mob. Upon defeating him, they leave with their girlfriend and the ending sets up for the sequel.

The sequel, Fight for NY, developed by AKI again, picks up immediately after the first game. D-Mob has just been arrested and is being brought in to police custody when the car transporting him gets broadsided by an SUV. The player plays as the SUV's driver, a fighter looking to make it big in the fight circuit, and who plans to use the rescue of D-Mob from police custody as the big break he needs. However, after barely any time as one of D-Mob's fighters, the protagonist finds out that D-Mob's criminal empire, and his hold over New York, has been have weakened, allowing another Syndicate led by Crow to challenge his for control of New York. The outcome of this Mob War is going to rest on the the protagonist's shoulders...

Unlike the four preset characters from the first game, the player is allowed to create their own character. The player can also choose between several voice types as well, and can even choose their own fighting style. Also, while Vendetta is a wrestling game, Fight for NY gives much more leeway and balance to other fighting styles and techniques, making it a Fighting Game. It is also a lot more brutal. A LOT more.

Following that was Def Jam: Icon developed by EA Chicago, who were creators of an entirely different series: Fight Night. Rather than expand on the formula, they tried to make more like a boxing game with rappers in it, which resulted in Something Completely Different from the rest of the series. While Icon ended up being mediocre at best, compared to the previous entries in the series, it was a severe drop in quality, and thus sunk EA Chicago completely.

Without hold of the license, the future of the Def Jam series as a fighter is questionable at best. Def Jam Rapstar was released on October 5, 2010. Published by Konami, Rapstar is a more of a karaoke style game.

"I'ma tear out your eyes and stick 'em on your knees and call ya Kneesy!"