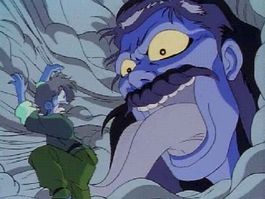 Soun is not happy.

The sudden eruption of an enraged individual's head into that of a demonic monster many times its normal size, with bulging eyes, wagging tongue, pointed ears and teeth, and sometimes jets of steam or flame from its nostrils. Usually expected to cow the viewer into defeat or submission; usually doesn't work.

Examples of Demon Head include:

Retrieved from "https://allthetropes.org/w/index.php?title=Demon_Head&oldid=1762426"
Categories:
Cookies help us deliver our services. By using our services, you agree to our use of cookies.