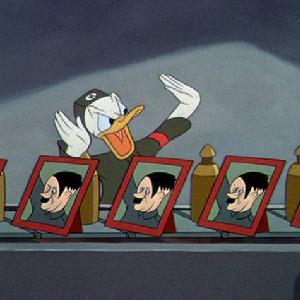 "Der Fuehrer's Face" is a 1943 animated cartoon by the Walt Disney Studios, starring Donald Duck. It was directed by Jack Kinney and released on January 1, 1943, as an anti-Nazi propaganda movie for the American war effort.

The short depicts Donald as a oppressed citizen of "Nutzi Land", The Theme Park Version of war-time Germany where almost everything is shaped like a swastika or an allusion to Hitler. He soon finds himself forced to work 48 hours every day to produce shells for the Fuehrer's war effort. Eventually he goes mad from stress, only to wake up home in America, relieved that his previous experience was All Just a Dream.

The film won the 1943 Academy Award for Animated Short Film, and was the only Donald Duck cartoon to win an Oscar. In 1994, it was voted #22 of "The 50 Greatest Cartoons" of all time by members of the animation field.